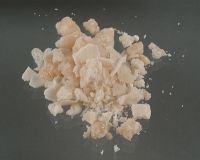 Crack cocaine is a freebase form of cocaine. It has been processed from powdered cocaine hydrochloride into a form of the drug that can be smoked. Crack, when purchased from drug dealers, looks like white or off-white, irregularly shaped and sized rocks.

What is crack and why is it called "crack"?

Crack cocaine is processed with ammonia or sodium bicarbonate (baking soda) and water. It is then heated to remove the hydrochloride. It is called crack because of the crackling noise the drug makes when it is heated and smoked.

This drug is a very powerful stimulant. Crack is nearly always smoked. Smoking crack cocaine delivers large quantities of the drug to the lungs. When an user smokes the drug, they experience its effects in as short as ten seconds! These immediate and euphoric effects are short lived, approximately five to ten minutes.

What is crack like when the user ingests it?

The intense high one gets from taking crack cocaine is what made this drug enormously popular in the mid 1980's and even today. Additionally, crack cocaine is commonly abused because it is inexpensive to both make and purchase.

What is crack and who uses it?

Studies show that individuals of all ages use crack cocaine. Data reported in the National Household Survey on Drug Abuse indicate that an estimated 6,222,000 U.S. residents aged 12 and older used crack at least once in their lifetime. The survey also revealed that hundreds of thousands of teenagers and young adults use crack cocaine. 150,000 individuals aged 12 to 17 and 1,003,000 individuals aged 18 to 25 used the drug at least once.

What is crack and what are the risks of using it?

What is crack and how does it affect the user? 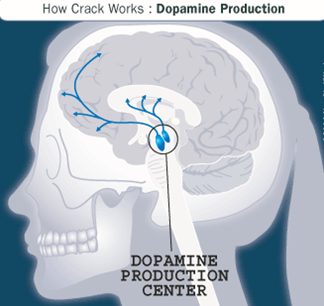 Crack cocaine acts upon a part of the brain called the ventral tegmental area (VTA). It interferes with a chemical messenger in the brain called dopamine, which is involved in the body's pleasure response. Dopamine is released by cells of the nervous system during pleasurable activities such as eating or having sex.

Once released, dopamine travels across a gap between nerve cells called a synapse. There it binds to a receptor on a neighboring nerve cell (also called a neuron). This sends a signal to that nerve cell which produces a good feeling. Under normal conditions, once the dopamine sends that signal it is reabsorbed by the neuron that released it. This re-absorption happens with the help of a protein called the dopamine transporter. Crack cocaine interrupts this cycle.

It attaches to the dopamine transporter preventing the normal re-absorption process. As dopamine builds up in the synapse, it continues to stimulate the receptor, creating a lingering feeling of exhilaration or euphoria in the user.

Stimulants such as crack speed up activity in the brain and spinal cord. People who use stimulants are often very talkative and anxious, looking to experience feelings of exhiliration.
The smokable form of cocaine is commonly known as crack. Crack is cocaine processed with ammonia or baking soda and water. This solution is then heated to remove the hydrochloride from it.